As she remembers it, he was about to tee off on the first playoff hole of the 1962 Michigan Open at Farmington Country Club outside Detroit

It was the first year blacks were allowed in the field and her husband, Pete Brown – the long-hitting, African-American golfer who was the son of Mississippi share croppers, who had overcome poverty, polio and the Jim Crow restrictions of the South and who two decades later would become a beloved fixture at Madden Golf Course in Dayton – had all eyes on him that day.

“Pete stepped up to hit his ball and there was a whole group of guys across the fence at a pick-up truck,” Margaret Brown recalled. “Just before Pete swings, one guy yells, ‘Hey (n-word)! What are YOU doing up there?

“Well, there were people all around the tee and everyone got so quiet you could have heard a pin drop. Everybody just froze.

“And Pete just backed off the ball, tossed his club on the ground and … started laughing. The crowd was like ‘OK, we can breathe again.’ And they started laughing and now everybody was pulling’ for Pete.

“And he steps back up and knocks that ball right down the fairway and goes on to win the tournament.

Pete Brown made history that day and he did again two years later when he won the 1964 Waco Turner Open in Oklahoma and became the first African-American to win on the PGA Tour.

He’s part of the 2020 induction class into the Mississippi Sports Hall of Fame that’s located in Jackson. The enshrinement ceremony was supposed to be earlier this month, but COVID -19 precautions have pushed the affair to an undetermined date in the future.

While the festivities are on hold, there’s no delay in saluting the feat.

“He’s their first African-American golfer,” Margaret said. “I was talking to one of our daughters a while back and she said, ‘Daddy sure made a lot of history, didn’t he?”

Rick Cleveland, the long-celebrated Mississippi sports columnist who was once the executive director of the Mississippi Hall of Fame, is now on its selection committee and is himself a Hall enshrinee, was instrumental in promoting Brown’s induction.

In reference to that 1964 victory, he said: “Think about what Pete did and the times he did them in. He won out on the PGA Tour before schools where integrated in Mississippi. He won on courses where he was not allowed to play were he not part of the PGA Tour.

“To me, he was a slam dunk for the Hall of Fame. His induction is long overdue. A lot of the people in the Hall here didn’t necessarily succeed on the national level, but he was big time. He was a true sports pioneer.”

And just as importantly, Cleveland said: “Pete was just a good guy. A real gentleman. I mean he had every reason in the world to be resentful for the way things were when he grew up, but he wouldn’t dwell on any of it. And when we talked, he would change the subject if I tried to get him to talk about it.” 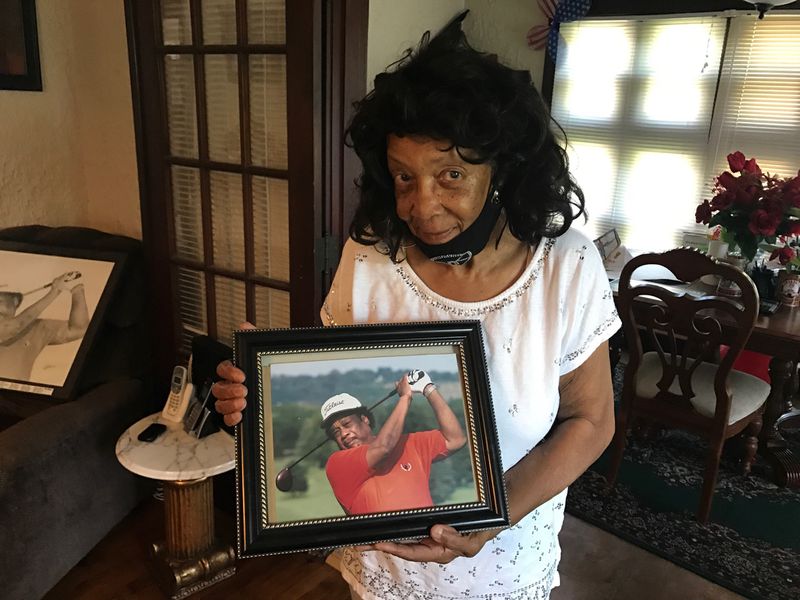 If you knew Pete Brown, you know it’s not just what he did in his career, it’s the way he did it.

He was one of golf’s true Pied Pipers, a quiet, gracious, extremely well-liked man who managed to lead others out of the racist rough, back into the fair way, the right way, the way things should have been in the first place.

Yet, there were plenty of snubs along the way.

He joined the PGA Tour just a couple of years after the organization dropped its “Caucasians Only” rule. Charlie Sifford, who Pete often traveled with to tournaments – broke the color barrier first, but at various tour stops they both still ran into the constraints of segregation.

At some tournaments they were not allowed to eat in the dining room with club members. They were given meals in separate quarters and, in a show of solidary, a few white pros – Bob Goalby, Art Wall, Jackie Burke and Bob Rosbug – began eating with them.

During a tournament in Florida, Pete slept in his car because of threats from the Ku Klux Klan.

At a tournament here in Ohio, he stepped outside the ropes to buy a hot dog. Upon his return, a marshal refused to let him back across the rope until fellow pro, Tom Weiskopf came over and settled matters.

“Pete didn’t let a lot of things bother him. That’s just the type guy he was. But Charlie… Oooh! He’d get upset in a minute,” Margaret laughed. “He had this little pocket knife he carried around and he’d pull that thing out.”

One day many years ago Pete and I were sitting in the Madden pro shop when he told me one of his favorite Sifford stories:

“I remember we were at the Western Open in Chicago and Charlie wasn’t playing well. He’d lost his ball in the rough and that’s when a white guy in another group yells to Charlie that his ball was in the bunker.

“Charlie, though, didn’t acknowledge him so the guy yells again. Charlie still didn’t pay attention, so the guy walks away shaking his head and he tells his buddy: ‘I told that (n-word) his ball was in the bunker!’”

“Well, Charlie heard that and the next thing I know he’s chasing the guy down the fairway with his knife.”

That Pete let things “roll off his back,” as Margaret put it, is feat in itself.

His back was a mess. He had recurring pain after a 1956 bout with polio left him partially paralyzed in the Herman Kiefer Hospital in Detroit for nearly a year. During that time his weight plummeted from 176 to 100 pounds.

He was told he might never walk again and he certainly would have to forget golf.

Instead, he fought his way back to health, inspired by the hospital visits of guys such as Sifford and former heavyweight champ Joe Louis.

That led to a 14-year stint on the PGA Tour, several top-five finishes and his two landmark wins, especially the second at the 1970 Andy Williams, San Diego Open Invitational at Torrey Pines.

Pete came from seven shots down in the final round to beat Tony Jacklin, the reigning British Open champion, in a playoff. Jack Nicklaus finished third

Golf was his dream

Pete was born in Port Gibson, Mississippi and as a kid he chopped cotton and picked peas.

The family moved to Jackson when he was 10 and he soon gravitated to the Livingston Park golf course where he became a caddie, making 35 cents for nine holes and 55 cents for 18.

Blacks were not allowed to play on the course or any other in the city, but at night he said he and the other caddies would sneak out and play a few holes near the woods until they were chased off.

Back then he had just two clubs. He had found a left-handed 3-wood in a neighbor’s garage and although right-handed, he learned to hit it 200 yards. Later he found a right-handed five iron in a lake and he used that for every other shot, even putting.

“We heard about this course in New Orleans that let blacks play on Mondays for $3,’’ he once told me. “That put life in my dream.’‘

He and three friends began a weekly pilgrimage. They’d pile into a car after midnight and make the 160-mile drive, getting to New Orleans before dawn so they’d be the first group to tee off.

“We were always a little nervous,’’ he said. “Four young black guys going through those Southern towns at night, you could find yourself in trouble for nothing. You sure didn’t want to run out of gas.

“All we had in mind was playing golf from dawn to dark.‘‘ 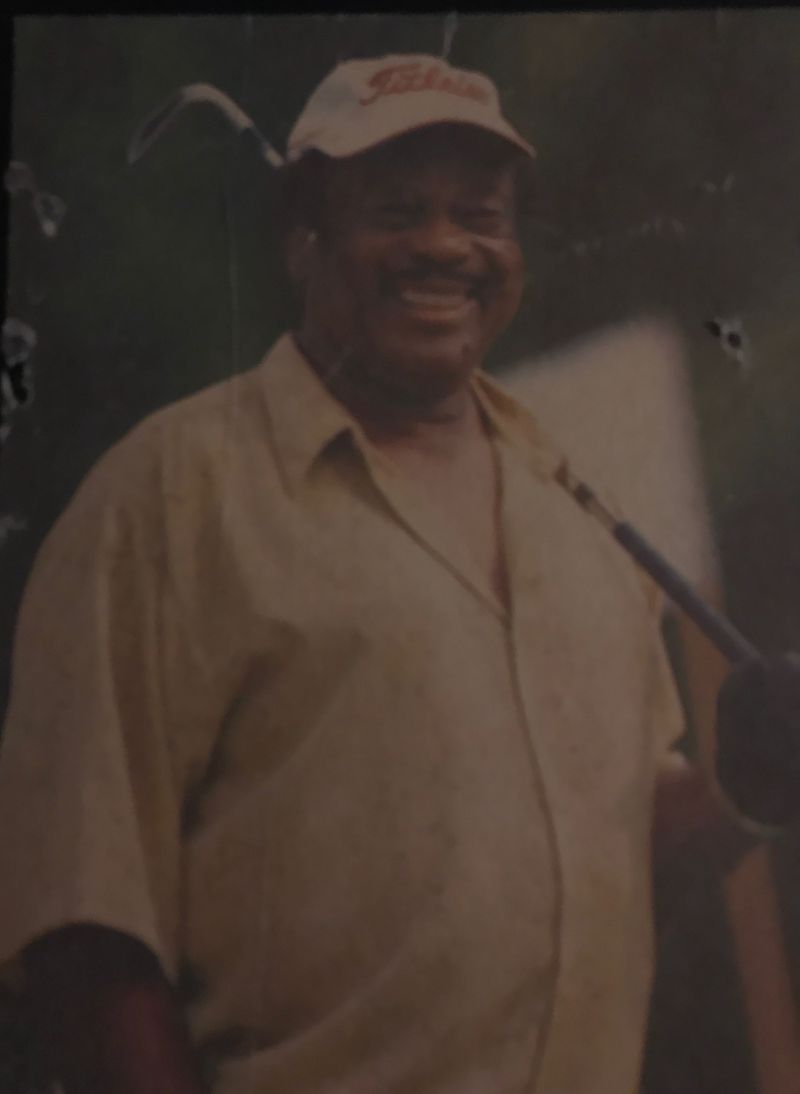 He eventually started playing in all-black tournaments on what was nicknamed the Chitlin Circuit. In 1955 that got him to Dayton and to Houston, where he won the Lone Star Open. He contracted polio a year later and once able to walk again, he returned to Jackson.

He went to a basketball game at Jim Hill High School and met 17-year-old Margaret, who was originally from Morton, Mississippi, but had graduated early and was back visiting from Chicago where she was studying nursing.

They hit it off, but Pete especially connected with her mother, Margaret said:

“Oh Pete was a real charmer with her. She loved him the first time she met him. He’d call and I’d think he was calling for me, but he’d talk a long time with my mom first.

“One evening he showed up and I said, ‘What are you doing here? We don’t have a date.’

“He said, ‘I didn’t come after you. I’ve come to take your mother to dinner.’ He took her to her favorite little spot at the bus station.”

About two months later, Margaret said he showed up while her mother was in the kitchen making all his favorite foods:

“She came out and asked Pete, ‘Did you tell her yet?’

“And my mother said, ‘You’re going to say yes because I just love Pete. He’s the son I never had.’”

Margaret started to laugh: “I’d only known him four months, but we got married on April 29th and we stayed married 58 years until he passed away.”

As she thought about Pete’s passing – after numerous strokes and congestive heart failure – she grew quiet, then said:

“Losing him still bothers me, We had such a wonderful life together.”

The couple had six daughters and Margaret – who said she joined Pete on the tour once every month or two – raised them at their Los Angeles home.

“When he was on the road, me and the girls would get on the phone and talk to him all the time,” she said.

“The girls would go, ‘Daddy, we learned a new dance and we taught Mama.’ At home at Madden

When Margaret would join Pete at tournaments, she did a little caddie work herself.

“Whenever he knocked his ball outside the ropes and into the rough, I’d get over to it quick and stand over it so no one would stamp it down on purpose to give him a bad lie,” she said. “They used to like to do that.

“When Pete would walk up, people would be smiling and say: ‘Your wife made sure nobody got to that ball.’”

When back pain began forcing him out of tournaments, he began running a driving range in Los Angeles.

A year after a fire destroyed the Brown’s home – including Pete’s trophy room – he took a job running Madden Golf Course in Dayton. Margaret ran the restaurant there and for 24 years the course was home.

Recurring health issues hastened Pete’s retirement in 2004 and later fellow African American pro Jim Dent – who Pete had taken under his wing in the early years – offered the Brown’s his second home, rent free, in Evans, Georgia, outside Augusta,

Ironically, when Pete was playing he was denied inclusion into the Masters field at Augusta. Usually tournament winners would get invited, but when he won the Waco Turner Open, the rule was changed.

A year after Pete died, Margaret’s daughters convinced her to return to Dayton. Now 80 and still vibrant, she lives with youngest daughter Tracie and her great grandson, 8-year-old Jordan, in Dayton View.

Although Madden was recently closed by the city, Pete has a public course in Jackson now named after him.

And now comes the hall of fame. When the festivities are held, the whole family plans to attend.

“I know Pete will be sitting up above smiling down on us,” Margaret said. “He’d be so proud. And like always, I’m very proud of him and the things he’s done.”

And now – all these years later – he’s again answering that loud-mouthed racist in the pickup truck who yelled: “What are YOU doing up there?”